Grounded by the pandemic, many housebound homeowners (at least, those who could afford it) spent the past year improving their living spaces, whether they were converting basements into boardrooms or transforming backyards into makeshift family resorts. Despite a COVID-ravaged economy, Americans spent a projected $338 billion on home improvements in 2020, according to Harvard’s Joint Center for Housing Studies, a 3.4 percent increase over 2019.

But after the construction crew has cleaned up and cleared out, there’s still one more item that should be on any homeowner’s remodeling to-do list. Changes to your home often demand adjustments to the insurance policy that protects it.

There are a number of ways a renovation can affect your homeowners insurance, but chief among them is this: After a major remodeling project, your home is probably worth more — and it would cost more to rebuild to its current standard should it be destroyed by fire or water.

“When you first get an insurance policy, they assess the features of your home and they say, ‘Here’s how much it would cost to rebuild your home,’ ’’ explained Angi Orbann, vice president of property and personal insurance at Travelers. “And as you make renovations and improvements to the home, that replacement cost, that cost to rebuild, likely increases. You want to make sure you have enough coverage on your policy in the horrible event that you might have a total loss.’’

You probably don’t need to call your insurance company after, say, painting the dining room, but “if it’s a big remodel, including kitchen and baths, you’ve just increased the value of your home, and your current policy probably doesn’t cover all the upgraded kitchen cabinets, appliances, and bath fixtures,’’ said Mark Philben, manager of project development at Charlie Allen Renovations in Cambridge.

It’s even more important to reevaluate your replacement cost coverage if you’ve added square footage or invested in high-end finishes and new furnishings. “The goal is to ensure the home is adequately insured to repair or replace the home with the same level of detail, finishes, and quality of workmanship,’’ said Scott Harold, regional risk consulting manager for the Northeast region at insurer Chubb.

Your home’s replacement cost is simply the amount of money it would take to rebuild it — with all the stuff in it — from scratch. A lot of factors influence that figure, but homeowners are often surprised to learn that it has little to do with their home’s market value. That’s because the land your home sits on is just as valuable as the structure itself, at least in the Boston area. A home’s lot accounts for about half of its market value in metro Boston, according to a 2019 Redfin study.

Yet in lower-priced areas, a home’s replacement cost could actually be higher than the market value — especially for an old home, since new construction must meet stricter modern building codes. The lesson, Orbann said, is not to conflate one with the other. “Market value does not equal the cost to rebuild a home,’’ she said.

It’s even more important to reevaluate your replacement cost coverage if you’ve added square footage or invested in high-end finishes and new furnishings.

And if a renovation cost you $100,000, adjusting your home’s replacement value isn’t just a matter of tacking on that sum to your existing coverage. “Sometimes a significant part of the expense of a home renovation is associated with tear-out costs, expenses that help a contractor tie in the new with the old, or expenses involved in replacing older furnishings with newer ones,’’ said Daniel Heinold, a sales and client services director at Amica insurance. Those types of one-off costs often don’t apply when rebuilding after a total loss, he said, “so you may not need to add quite as much additional insurance as you think.’’

So how do you know how much coverage you need after a remodel? Insurers have appraisers and sophisticated algorithms to help determine that — so in most cases, it’s just a matter of explaining the scope of work to your insurance provider. But if you want to come up with your own ballpark figure: A survey by the National Association of Homebuilders found that the cost of constructing a new home in New England — not including the land — averaged $158 per square foot in 2019. That would put the replacement cost of a 2,000-square-foot home around $316,000 (a number that’s surely risen in the last year due to inflation and lumber shortages).

You don’t have to wait until a renovation is done to contact your insurer, though. In fact, Philben suggested notifying them ahead of any remodeling work, to make sure you’re fully covered. For example, not all homeowners policies cover building materials from damage or theft, and some insurers may require fire extinguishers or other safety measures during a big renovation.

Outdoor upgrades can necessitate insurance changes, too. Backyard pools were a hot item last summer, with many installers reporting backlogs into 2021 — and even 2022, the Syracuse Post-Standard reports — as summer vacation plans evaporated. If you were among those who managed to get a pool installed, Orbann said that’s definitely something to tell your insurance provider. “There’s different liability on the policy when you have a pool,’’ she said.

New pool owners will probably want to increase their Coverage B insurance, too, Heinold said, which applies to detached structures on the property. Your insurance company will also want to know that you’ve met local safety codes. “We’d want to ensure there are certain safeguards in place, such as a locking fence,’’ Heinold said, “[but] there wouldn’t be too much of an impact on their premium.’’

In fact, a remodel doesn’t always increase your insurance bill. Some home improvements reduce the risk of property damage or injury, and thus may actually lower your premiums.

“Some carriers have discounts available for older homes if the home has been renovated,’’ Heinold said. Installing a new roof, for example, or replacing dated electric, plumbing, or HVAC systems could result in a discount. “Replacing these systems in an older home mitigates the potential for loss or damage and enhances the overall safety of the home, especially in the case of an older electrical system with knob-and-tube wiring,’’ Harold noted.

With non-flood-related water damage (such as from a burst pipe) accounting for more than 37 percent of total losses in 2017 and 2018 in Massachusetts — even more than fire — insurance companies typically reward homeowners who install an automatic water shut-off device. “[It’s] a nominal cost when renovating, and the investment can typically be offset by a premium credit,’’ Harold said.

Some home improvements reduce the risk of property damage or injury, and thus may actually lower your premiums.

Such home-monitoring systems are simple enough to install, Philben said, especially during a renovation. “When you’re doing a remodel and the walls are open, it makes a lot of sense to do it then,’’ he said. He suggests contacting your insurer beforehand to see what kind of discounts you can expect — and what level of monitoring is required. For example, it’s neat to be able to keep tabs on your home’s major systems with your smartphone, Philben said, but often when it comes to discounts, “the key is that it’s being monitored by an alarm company … and they can track if there’s a sudden or prolonged drop in water pressure in the house.’’

Another such home upgrade is an automatic whole-house generator, Harold said, which can ensure your heat stays on during a power outage, reducing the risk of frozen and burst pipes. “While the benefit is to maintain safety and comfort during power outages, it’s an often overlooked upgrade that may be eligible for a premium credit,’’ he said.

As always, it’s helpful to take and safely store photos of any remodeling work performed and the contents of your home in case you ever need to file a claim. And in that unfortunate event, Philben said, it can pay to bring in your own adjuster. “If there is, God forbid, a claim, you want to get a public adjuster — somebody you hire as opposed to the insurance company’s adjuster,’’ he said. “Oftentimes they’ll negotiate a better deal for you.’’

Even if you didn’t complete a renovation in 2020, the start of a new year is a good time to review your homeowners policy.

“We typically encourage people to revisit those coverages once a year anyway and think about their current home situation,’’ Orbann said. And there’s no need to wait until your policy is up for renewal if you do decide to make changes. “You can review it at any point in the year and call in and make updates,’’ she said.

That sounds like a good new year’s resolution for any homeowner.

Jon Gorey blogs about homes at HouseandHammer.com. Send comments to [email protected]. Follow him on Twitter at @jongorey. Subscribe to our free real estate newsletter at pages.email.bostonglobe.com/AddressSignUp.

A Stately Brick House Outside the house of D.C. Will get Much less Formal and A lot more Present day

Fri Jan 8 , 2021
When Matt and Sara Tucker first toured their property, they had been mentally earning programs for how to rip out the authentic tufted silk partitions, patterned matching home furniture and toile wallpaper. “It felt like décor you would see at the White Property,” states Ms. Tucker, 42, a spouse at […] 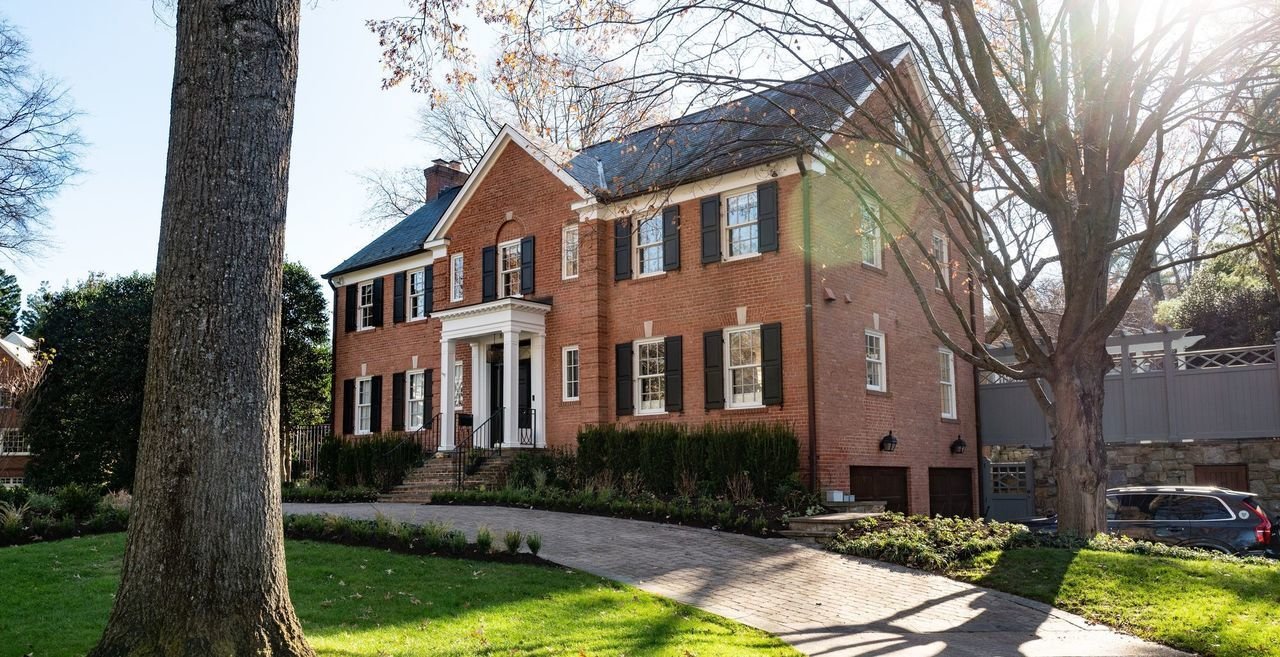 how to make a business plan