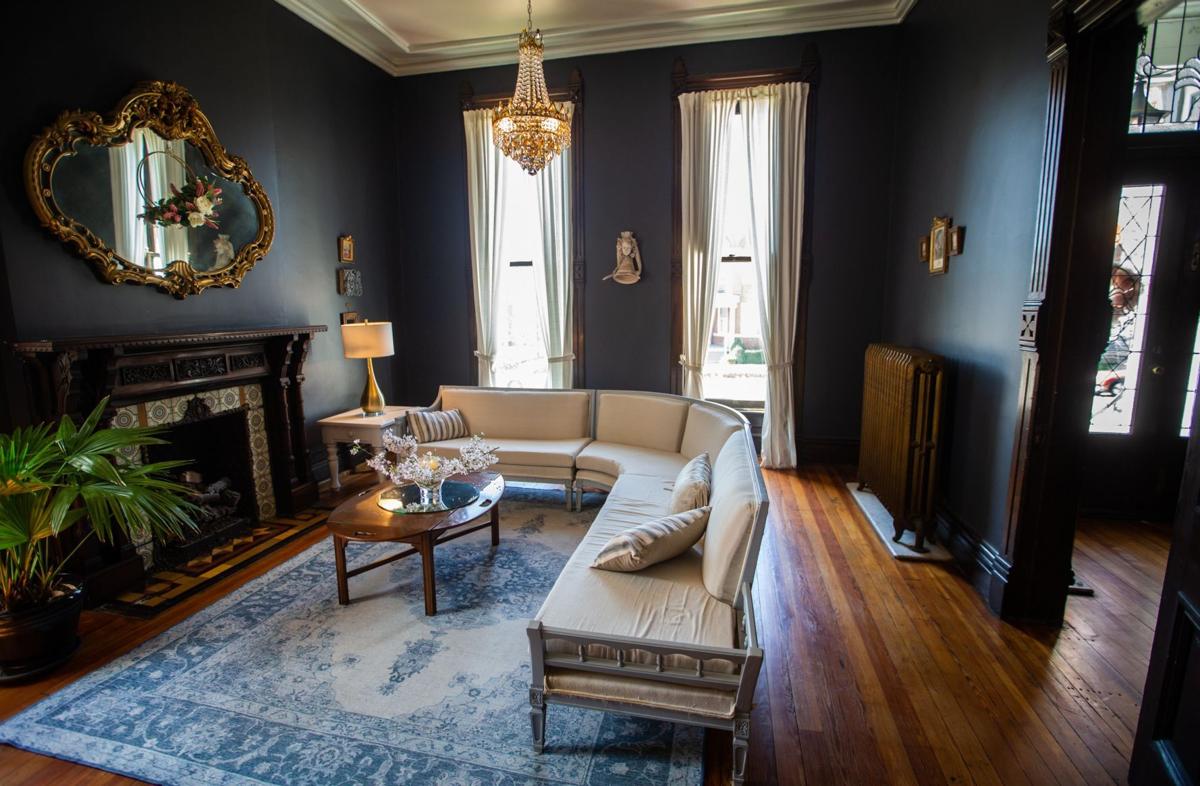 In the parlor, Paula placed a vintage couch she found on Craigslist that she reupholstered with a drop cloth. She wanted to furnish the house with comfortable but age-appropriate pieces. 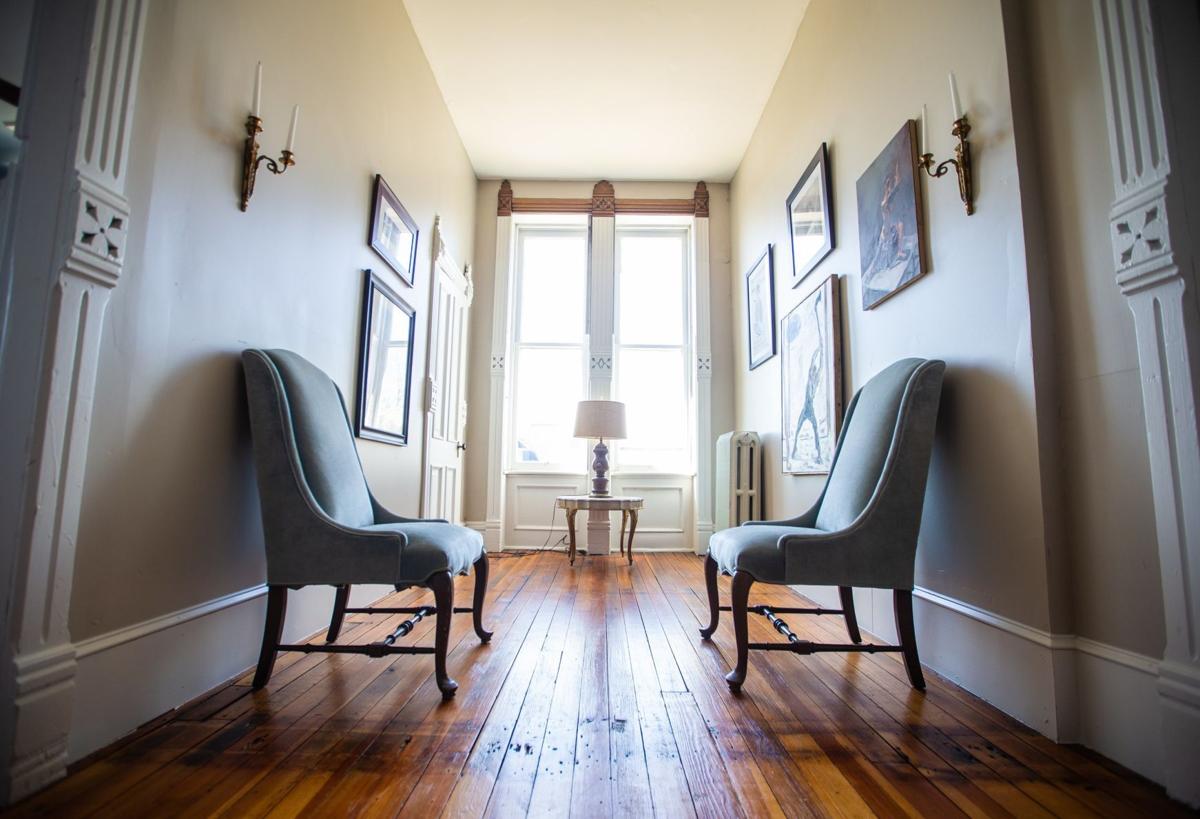 Natural light filters through Hartmann Manor’s second floor, where Tom did most of the renovations. He put up new dry-wall, tore out old carpet that covered the floors and painted the walls white. 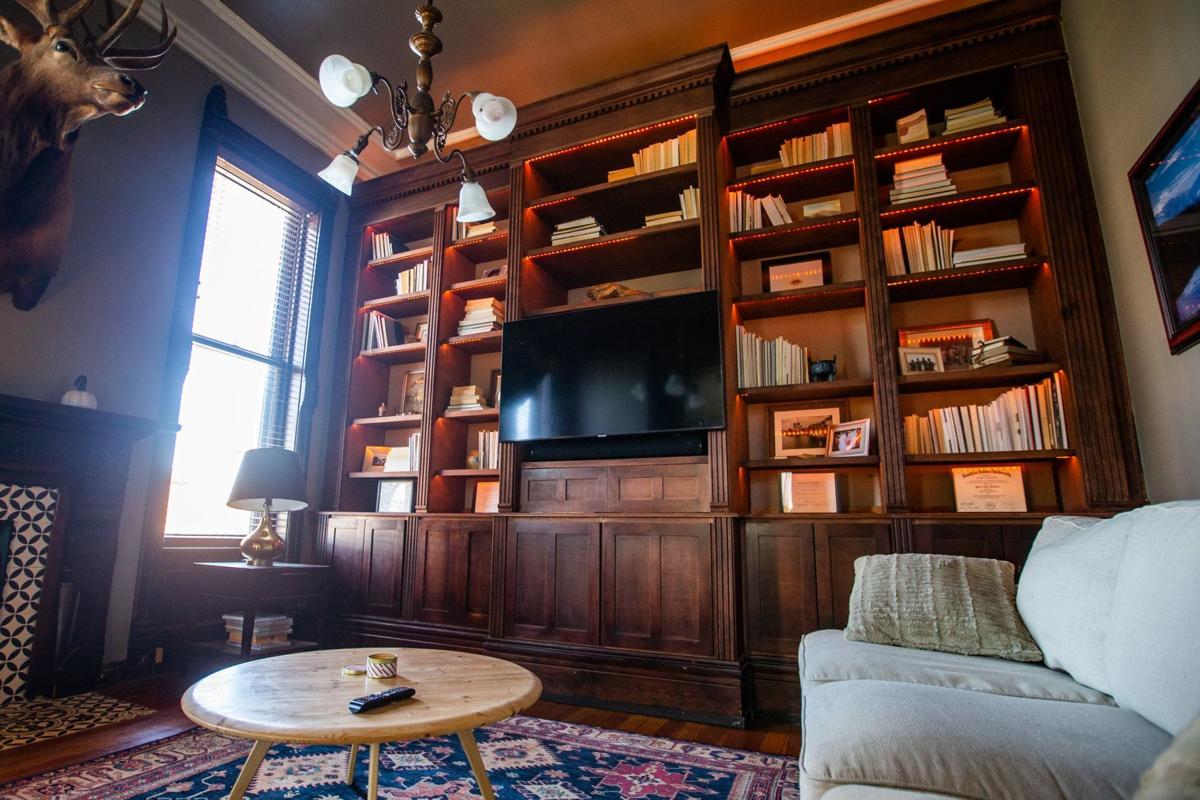 Paula says the family spends most of their time together in this living room off the main hall. The bookshelf and gas-electric light fixture that hangs from the ceiling are original to the house. 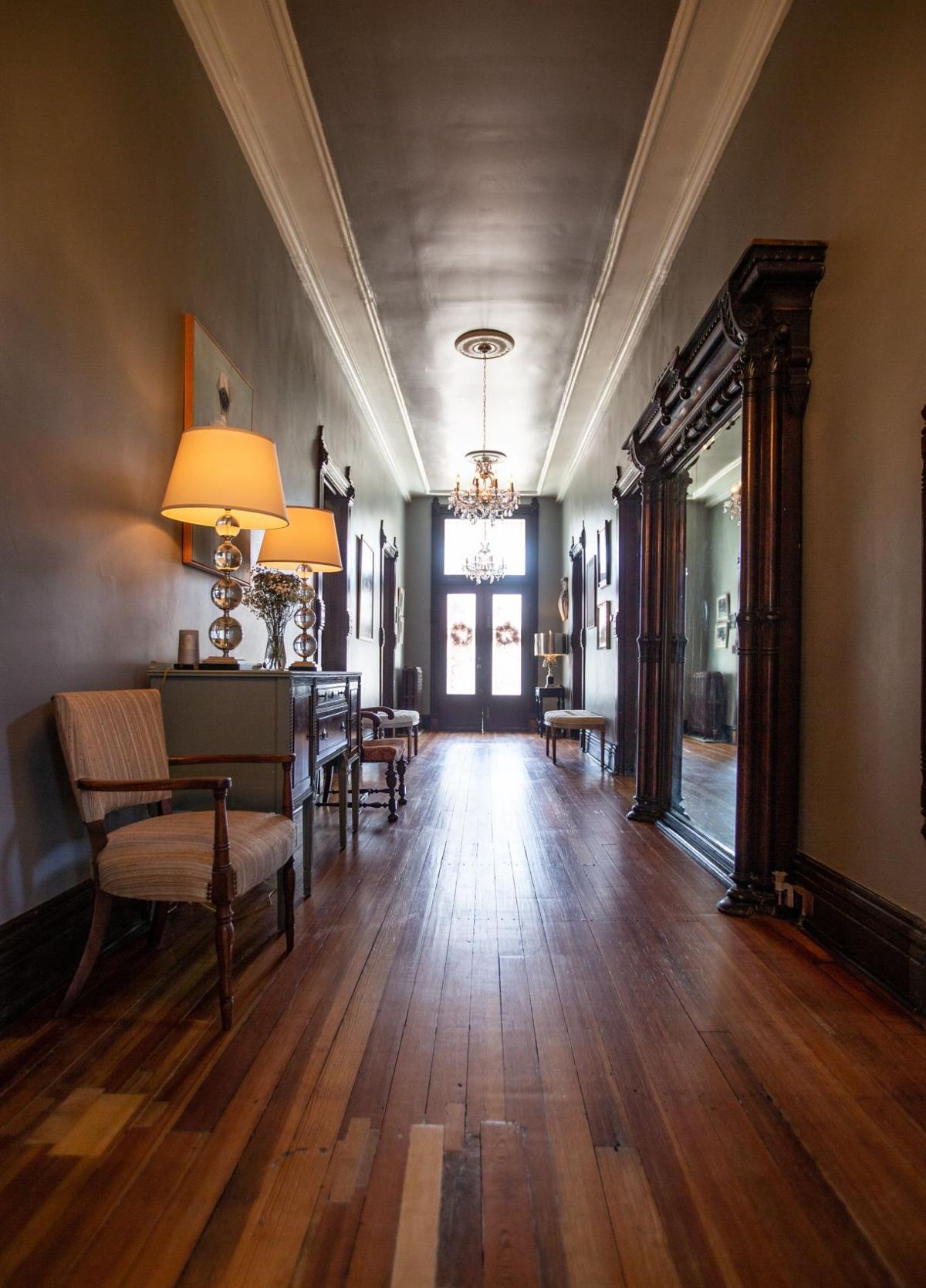 An 8-foot-by-8-foot mirror stands in the house’s main hall. Paula believes it once hung above a fireplace at the original owner’s brewery. 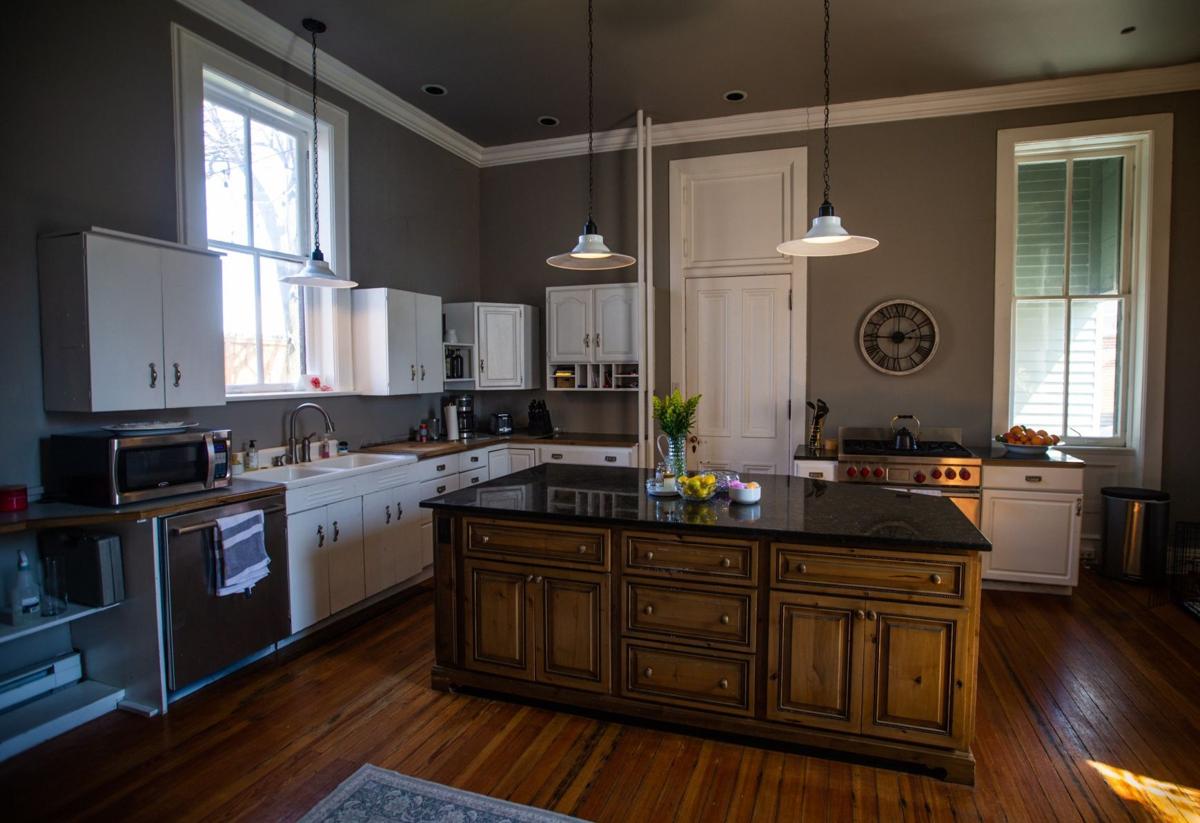 The Haniszewskis didn’t change much in the kitchen besides its color. At first, a servants’ staircase blocked the entrance to the kitchen from the rest of the main floor. Tom tore it out and patched parts of the kitchen’s floors with wood from the attic. 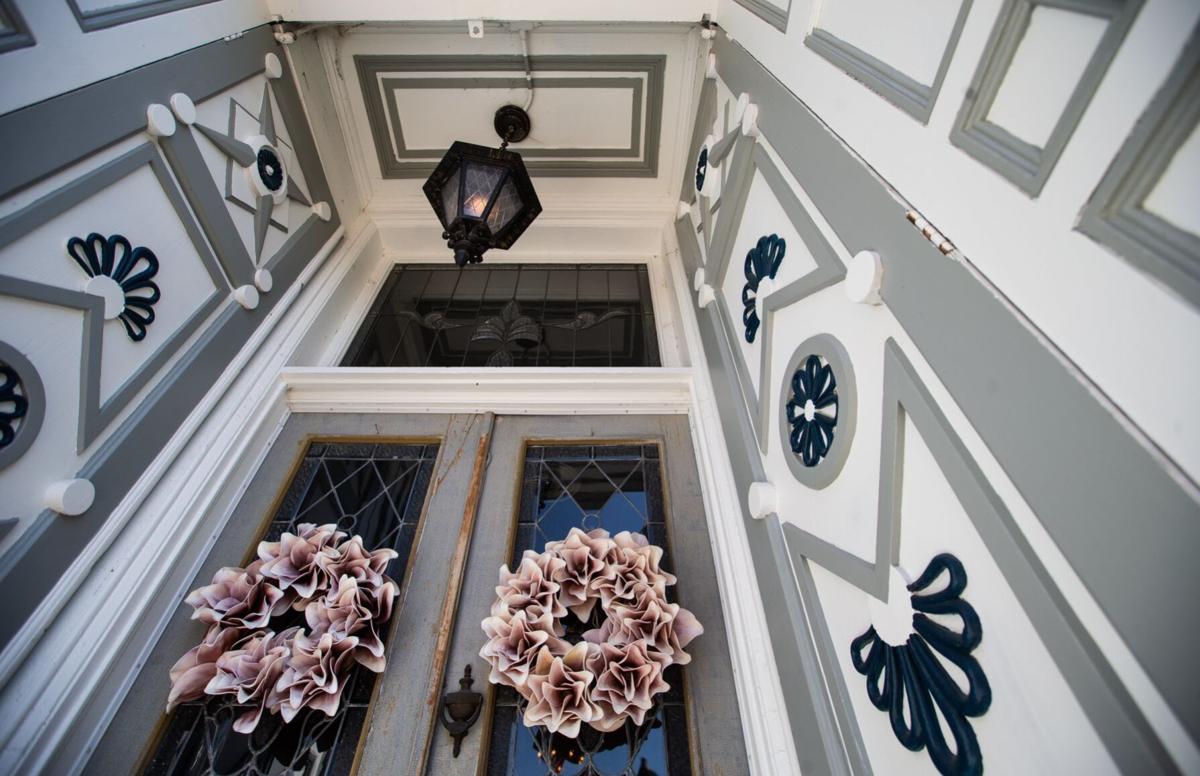 In the front entrance, the house’s winter doors match the color palette of the rest of the house  — navy blues, whites and light grays. Restoring and repainting the house’s exterior woodwork was one of the first tasks the Haniszewskis completed when they bought the property. 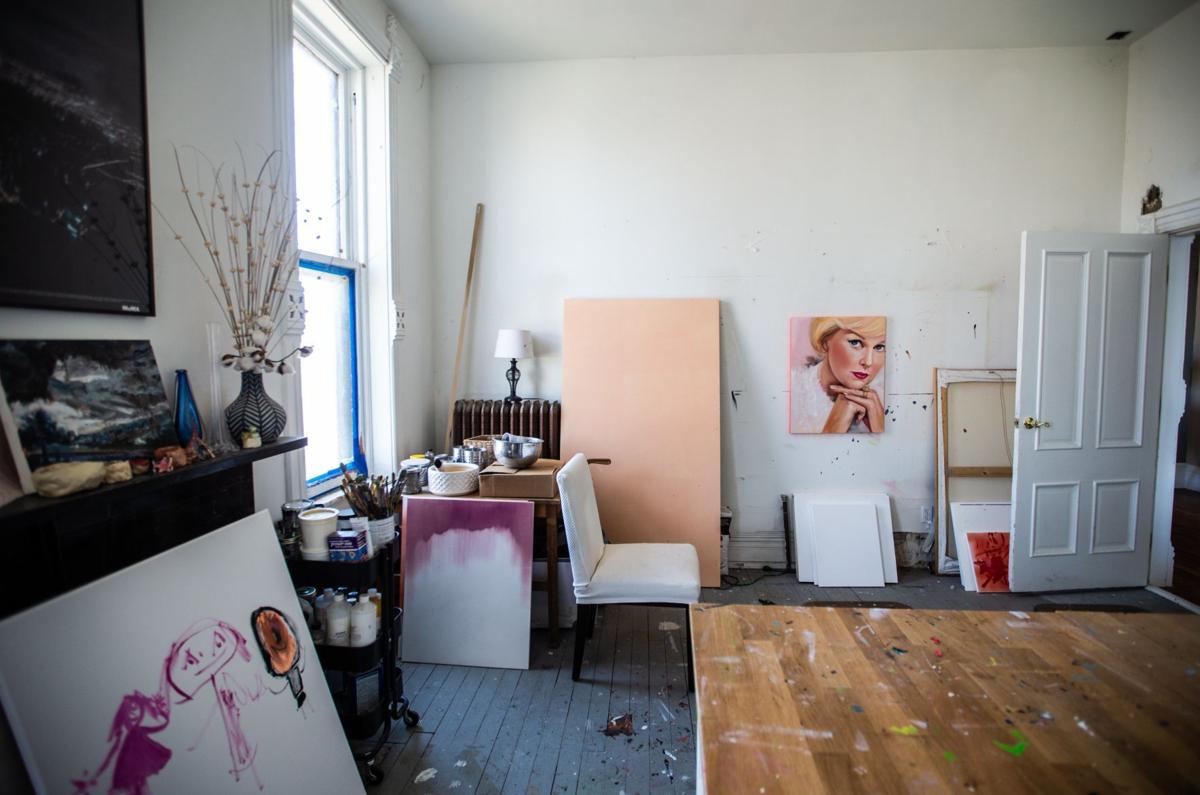 An upstairs room acts as a dedicated art studio for Paula Haniszewski. The north-facing windows give the perfect neutral light for a painting studio. Photo by Sara Diggins, [email protected]

By Monica Obradovic
Special to the Post-Dispatch

Tom and Paula Haniszewski had walked by Hartmann Manor in Belleville for six years until Tom finally decided, “if no one is going to fix it, I will.”

Overgrown shrubs suffocated the house’s facade. Vines grew up its chipped, mustard-yellow walls. When it was built around 1885, the house was once the pinnacle of Gilded Age decadence. The Haniszewskis said they could not stand to see a piece of history lost.

“We should preserve the past and appreciate things that are old,” Tom says. “I felt like I owed it to the house to help it out.”

Restoring some of the house’s original details has been much of the Haniszewskis’ focus since they bought the house four years ago.

The house was originally the home of Belleville brewmaster Bernard Hartmann. Hartmann owned Star Brewery where St. Theresa’s Church currently stands in Belleville. He died in the house in 1919, according to Belleville News-Democrat archives.

Various owners used the property for different purposes after Hartmann’s death. In the 1940s, it was an apartment complex. After that, a law office. The couple who owned the house before the Haniszewskis turned the space back into a single-family home.

Mementos of the house’s past are scattered throughout the home. Paula has counted 175 stars in the woodwork, fireplace mantels and corbels outside for Star Brewery. In the main hall stands a massive mahogany mirror that Paula believes once hung above a fireplace at the brewery.